Nick is an award-winning photographer who had a very successful career in the advertising industry before specialising in music and celebrity and worked on major above-the-line campaigns for top London agencies like Saatchi and Saatchi, TBWA, and Publicis.

I’m so excited! Today I am launching the new CAT Business Show on the on-demand radio channel Deep Red Radio and syndicated around the world on iTunes, TuneIn, Stitcher, Deezer and audioBoom.

Set your RSS and visit catbusiness.show regularly so that you can tune in to the fabulous episodes that will be coming soon when I talk to business leaders about all things communications, marketing, promotion, and business. END_OF_DOCUMENT_TOKEN_TO_BE_REPLACED

Well, after thirty years of publishing, the Independent and the Independent on Sunday have ended their print editions in late March and, although they’ll continue online, it is a sad indictment of the changing face of the media.

At its peak in the late 80s, the Independent was selling more than 400,000 copies a day but its final paid circulation had fallen drastically to around 56,000. Internet publishing wasn’t even possible then, let alone a priority. The big strategic question then was whether the newspaper should be reformatted, from broadsheet to tabloid, to bolster sales against the already-tabloid Times, which seems almost laughable by today’s standards. END_OF_DOCUMENT_TOKEN_TO_BE_REPLACED

Right on the back of being invited to judge the fantastic Chartered Institute of Public Relations (CIPR) Excellence Awards, I have now been asked to also become a judge for the CIPR PRide Awards 2016.

These regional awards recognise excellence in PR and communications, celebrating the most outstanding work delivered by consultancies and organisations across the UK.

END_OF_DOCUMENT_TOKEN_TO_BE_REPLACED

This week brought a lovely surprise – I have been invited to be a judge for the fantastic Chartered Institute of Public Relations (CIPR) Excellence Awards 2016.

The annual Awards are public relations’ most established celebration of creativity and professionalism and are designed to recognise the most outstanding PR‬ talent across the UK. END_OF_DOCUMENT_TOKEN_TO_BE_REPLACED

For anyone who has ever published or updated their website, there is a moment of nervous anticipation just before clicking the button to make it live. I have felt that feeling this very morning.

After months of hard work, the moment has finally arrived to launch my newly created website onto the unsuspecting public. END_OF_DOCUMENT_TOKEN_TO_BE_REPLACED

As everyone can appreciate, whether they are simply a passive receiver or the active sender of the message, advertising is an immensely useful communications tool in reaching a mass audience and a technique that most businesses employ at some point during the course of their marketing.

Over the course of the last two years I have run a small campaign to promote my PR services and although it has been very well received and has produced some brilliant results, it is time to wave it goodbye.

END_OF_DOCUMENT_TOKEN_TO_BE_REPLACED

It has been a year of crises. Professionally speaking you understand, although life does have a bit of a habit of throwing in a curved ball occassionally.

Now, being involved in crisis management isn’t that unusual for a PR practitioner – after all, it is the role of PR to protect the brand during a crisis. But what has been a little different, for me, has been the number of times the subject has arisen in different guises over recent months. END_OF_DOCUMENT_TOKEN_TO_BE_REPLACED

They say that a day is a long time in politics. In the music industry, a decade seems like a lifetime.

In a short space of only a few years, the way we consume music has changed unrecognisably, metamorphosing from the fantastic plastic through to pint-sized compact discs and settling on the current darling of choice…the digital download.

Whatever next? Cranial implants? You may smile, but that ‘fantasy’ may not be confined to the realms of science fiction with recent developments in China already pushing the boundaries of android technology. END_OF_DOCUMENT_TOKEN_TO_BE_REPLACED

“An app is the next progression for us….you can sort that one out for us, can’t you, CAT?”

What a gauntlet to throw during the latest meeting with my client, Deep Red Magazine. I couldn’t argue with the logic….Apps are not only critical as a means of accessing online content for a publication but are also expected to be available, so I had only one option.

END_OF_DOCUMENT_TOKEN_TO_BE_REPLACED

There was a time when social media was simply about being social. Nothing wrong with that, but many business sectors have been ‘laggards’ in the adoption of it as a powerful communications channel.

There was a lovely campaign that I wrote about in Saving Social Media, where twitter was used to recount a real-time 24-hour reconstruction of the D-Day landings. An imaginative example of how social media can be used to powerful and emotive effect.

END_OF_DOCUMENT_TOKEN_TO_BE_REPLACED

If you’re a regular visitor to my site, you’ll no doubt be aware that I had an amazingly busy Summer working with my clients The Marmalade and rock photographer Nick Elliott on an incredible project.

I’ve also written, recently, about my thoughts on digital media and the increasing complexity of the role of Public Relations.

END_OF_DOCUMENT_TOKEN_TO_BE_REPLACED

I found myself in a North Norfolk pub a couple of weeks ago.

I confess that there is nothing strange about that, in itself, but what followed filled me with surprise and bewilderment.

I was participating in a photoshoot with rock photographer Nick Elliott and Scottish hit makers The Marmalade when poor weather stopped play and forced us to take refuge in the rural drinking establishment.

END_OF_DOCUMENT_TOKEN_TO_BE_REPLACED

It is very rare that a marketing or PR campaign stops you in your tracks and makes you think.

Last month, however, a wonderfully creative online campaign really excited me as a communications professional, but more importantly, as an individual living in the UK post 1945.

On the 69th anniversary of D-Day, Channel 4 portrayed a real-time 24-hour reconstruction of events using seven twitter accounts of real-life survivors of the 1944 invasion – D-Day: As It Happens. END_OF_DOCUMENT_TOKEN_TO_BE_REPLACED 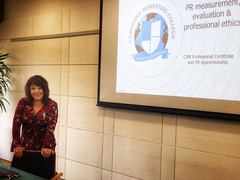